The story of Miša, a survivor pelican in Montenegro

The Center for Protection and Research of birds of Montenegro (CZIP) is the main organisation working on bird and habitat conservation in Montenegro and one of the partners collaborating on the coastal wetlands action plan funded by MAVA. CZIP is working to prevent the illegal killing of birds in the country whilst focusing on some of the most iconic wetlands : Skadar Lake and Ulcinj Salina. In collaboration with Noe Conservation, CZIP is also working on the conservation of Dalmatian Pelicans in the region.

Recently, a symbolic event brought the work being done by CZIP in Montenegro to the limelight, when a female Dalmatian Pelican was found wounded in the Ulcinj Salina. The bird had been shot and was in an extremely poor condition with its legs paralysed. CZIP did everything feasible to save the bird – fortunately successfully.

The bird was named Mišo, after a ranger who helps CZIP to fight illegal killing of birds in the Ulcinj Salina. After a thorough scan and some treatment, the bird was able to stand on its feet and the paralysis slowly disappeared. After checking the bird’s weight, it appeared that it was actually an immature female, so its name was changed to Miša!

Miša has now been released back with its colony in Skadar Lake. CZIP will hopefully be able to monitor her offsprings via video in the Panceva Oka reserve, where MAVA has supported the construction of nesting platforms. Miša has been marked with a harmless blue color, more precisely with a disinfectant, which will be washed off over time, but which is a way to recognize her and, if necessary, provide assistance again.

Miša’s fate was discussed at many levels, primarily with veterinarians and pelican experts who did not recommend surgery nor the extraction of the pellet because it was situated too close to the bird’s the heart, therefore too risky. A toxicological analysis was also performed and did not find any trace of lead in Miša’s blood. This means that the pellet is fortunately not in contact with blood vessels, enabling Miša to have a long and healthy life.

Miša as a survivor and a symbol of all the work being done in Skadar and Ulcinj by CZIP. Their work is critical to ensure that Pelicans can fly safely in their natural habitats of Montenegro without the threat of being shot or ingesting lead pellets left by poachers and hunters. 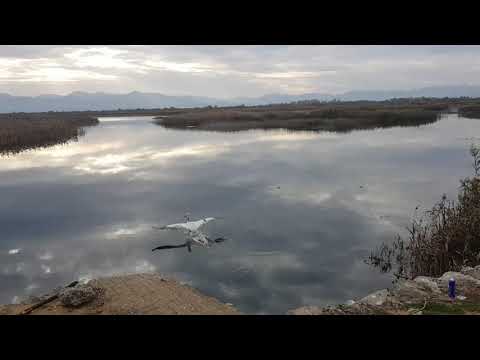