Every year, the magic repeats itself. Thousands of male and female loggerhead turtles (Caretta caretta) come to breed in Cape Verde, the world’s third largest nesting site for this species behind Oman and Florida. After mating at sea, the females shyly climb onto the beaches at night to dig a nest and deposit their precious eggs. It is a moving moment to meet these prehistoric reptiles, most of which are twice the age of the guardians that protect them. After about two months, buried in the sand, the juveniles come out and head towards the sea. They then engage in a race for survival against crabs, birds and sometimes even stray dogs love to eat these still tender little turtles. In addition to this obstacle race, it is sometimes difficult to get around the marine waste that unfortunately litters the beaches. For the lucky ones who manage to reach the sea, the great adventure begins. They quickly leave the coast and begin a dispersal period in the ocean until they reach sexual maturity and return to where they were born and reproduce again.

Since 2014, from June to October, the critical nesting period, Biosfera staff deploy all their energy to monitor the nesting sites on the inhabited island of Sao Vicente and on the deserted and protected island of Santa Luzia. Not only do our patrols protect the turtles from natural and man-made threats, but each night they also count the number of nests and redirect lost females at dawn. A stretcher has been specially designed to facilitate their transport to the sea in complete serenity. 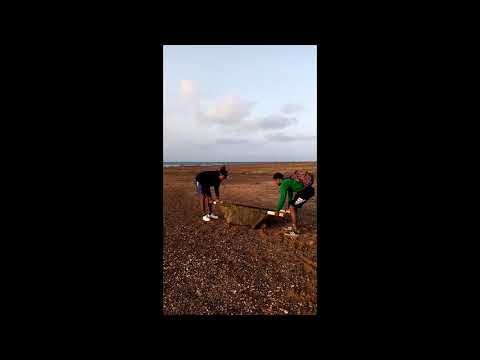 This year, we are happy! One month before the end of the nesting season, Biosfera has recorded an absolutely fantastic number of nests in Santa Luzia (5’760 nests as of 16 September 2020). This number is the highest ever recorded since our first follow-ups, and remains higher than the 5’500 nests counted at the end of October 2018, an exceptional year for the whole of Cape Verde.

On the island of Sao Vicente, vast communication campaigns are organized to raise the population’s awareness about turtles. Messages are broadcasted on the radio, information panels are placed at the entrance of the beaches reminding people of the legislation in force, a green line “SOS Turtles” encourages citizens to anonymously denounce poaching acts and to report illegal activities practiced on the beaches (sand extraction, bad fishing practices, presence of stray dogs…).

Finally, on our website, a Quiz “What do you know about Cape Verde’s sea turtles“ encourages Internet users to evaluate their knowledge . You too, test your knowledge!