Mediterranean Monk Seal breeding females always give birth on the same dates in Cabo Blanco (Mauritania). For this reason, every year, ‘Berta Cáceres’ (female monk seal no. 2450 of the colony, aged 9 years) is the first to give birth in the Costa de las Focas Reserve.

The breeding season (usually March to November) is the most important period of the year in the reserve. Everything that happens in the colony with mothers and their little ones is closely monitored by the Monk Seal Conservation Program operated by the CBD-Habitat Foundation Biological Station.

Cameras have been installed inside the caves, and the technicians working for the programme, Moulaye and Abba, keep a constant eye on the monitors, looking for the pups and their mothers, taking photographs, recording births, lactation sessions, interactions between mothers, pups and other seals… This is an intensive monitoring of what is going on in that little universe formed by the colony, with its relationships, its hierarchies and its vicissitudes. It may happen, for example, that a seal that has lost its pup tries to ‘steal’ another pup and takes care of it as if it were her own, or a pup might try to suckle from a female that is not its mother, or several pups might try to drink from the same female at the same time…

All the information is collected in a complete catalog of the pups and their mothers, with descriptions and photographs that make it possible to unequivocally identify each individual in the colony and know which females reproduce each year, as well as their sex and identity.

This is important because the first weeks of the life of the young seals are especially delicate. Until they reach two months of age, monk seals are very fragile animals, exposed and defenseless against certain dangers such as storms. Although it may seem incredible, the caves in which the species has managed to survive human persecution, where they are born protected from humans, transform into mortal traps during storms. Some years, the pups’ mortality rate can reach 40% in the colony. Once they have shed their delicate, shiny black pup fur, the chances of survival increase greatly.

Every year the CBD-Habitat Foundation draws up a pup calendar indicating which females should give birth in which month, because let’s remember… Mediterranean Monk Seal breeding females always give birth on the same dates of the year. After more than 20 years of conservation work in the colony, the number of births each year has increased from 24 to about 80. An achievement that has cost a lot of time, hard work and effort, with the help of CBD-Habitat Foundation as well as other entities and people determined to make the species survive, for the good of the planet and of all the beings that inhabit it.

More information can be found here or watch the video of Berta and her pup: 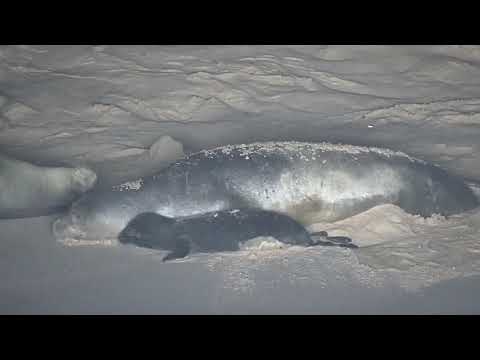